What is a cataract?

The eye can be compared to a camera. The lens in a camera focuses images on the film in the back of the camera so that a sharp image is formed. The lens inside of the eye focuses light on the retina in the back of the eye. With a cataract, the lens inside of the eye becomes cloudy or opaque, and prevents images from passing through to the back of the eye. What a person with cataracts sees is similar to the image obtained from a camera with fog, mist, or cellophane tape over the lens – varying from slight distortion to barely being able to distinguish light and dark. (Twenty million people in the world today have complete white cataracts in both eyes!) 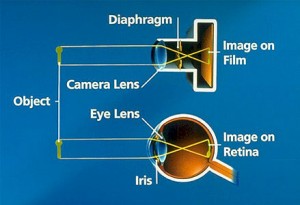 A diagram showing the similarities between the eye and a camera.

Ophthalmologist Richard Lindstrom, M.D. explains what a cataract is.

Continuing the analogy, when a camera lens is dirty, simply replacing it with a new lens restores the clarity of the image. With a cataract, surgical removal and replacement with a man-made intraocular lens, contact lens, or spectacles will permanently restore vision with a 99% success rate. Cataract surgery is one of the safest and most effective surgical procedures in the world of medicine and surgery.

Patient with bilateral cataracts. Notice the cataracts are white, preventing most light from entering and rendering the patient blind. Published in Community Eye Health Journal Vol. 23 No. 72 MARCH 201

Cataract is a world-wide problem. It is estimated that over 20 million people around the world are totally blinded by cataract, with an additional 1.25 million added each year. Only about 10 to 20% of all cataracts are removed. In developing nations there are not enough surgeons to perform the operation, e.g., 300 ophthalmologists to 3 million cataract patients needing surgery.

Volunteer eye surgeons and blindness prevention groups are only scratching the surface of the enormous cataract-blindness problem in the world today. The problem is getting worse rather than better, i.e., the world is becoming progressively more blind despite our current best efforts.

All of the international eye care agencies, organizations, and volunteer eye surgeons in the world today are performing approximately 1.5 million free cataract operations a year. This means that each of the twenty million cataract blind individuals must wait an average of eight years to have sight restored in only one eye, if they can manage to live that long.

World eye surgeons are currently under-utilized. For example, the average eye surgeon in the United States performs less than six cataract surgeries per month. In the United States and elsewhere, there exists an untapped reservoir of surgeons whose talents can be re-directed toward curing world blindness. This is attested to by the fact that more than 300 eye surgeons responded to a recent call for volunteers at the International Congress of Ophthalmology in Singapore.

The world’s current 18-million cataract-blinded can see no motions or movements with either eye. They can only detect whether a light is on or off and where the light is coming from, or if it is day or night. They are truly blinded by their cataracts. 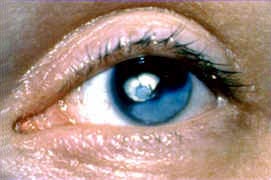 Eighty percent of today’s cataract-blinded live in rural areas of poorer countries. We must take the eye-surgery to them. This requires local and volunteer eye surgeons operating in minimally-equipped rural eye operating rooms. They can have excellent vision restored by removal of the white portion of the cataract, leaving in the eye, the still-clear, thin, outside-portion of the lens, called the “lens capsule,” to hold a new lens implant which gives almost 20/20 vision to 98% of the individuals who undergo this operation. Many of these people claim it is “a miracle” when their vision is restored by today’s micro-surgical cataract operations.

In rich countries, cataracts seldom progress to the white stage but they only blur vision a bit when removed.

Up to ninety-percent of cataract operations done in rich countries are not for white-cataracts but are for blurring cataracts. But the mechanics of the sight-restorative cataract operation are almost the same.

The nucleus and cortex of the cataract are cleanly removed by micro-surgery and replaced by an “IntraOcular Lens.”